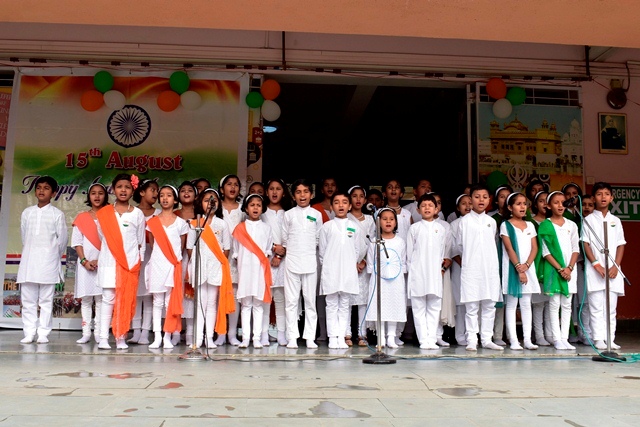 The celebration started with the warm welcome and introduction of the chief guest by Mrs. Dyna. After that the national flag was hoisted by honourable chief guest Sr. Letitia D’souza followed by National Anthem and Pledge said by everyone present there. Mrs. Vidhya Patil said a Pledge in Marathi and students repeated it. Then there was a March Past performed by std 10th.

Prize distribution was held . In memory of Karan Kaushik shah his parent presented the awards to one of the deserving student, class two toppers of 7th , 8th and 9th std. and also to a student who is good in sports. Awards were given to the 10th std. toppers 1) Angelina Parida, 2) Pranav Munot 3) Suraj Hondappanavar by our honourable Chief guest Sr. Letitia. Awards were also given to the subject toppers of 10th std. General Proficiency awards were given by Sr. Regina the Primary incharge to the students of std. 1st to 5th. General proficiency awards 6th to 9th and 11th were given by our chief guest Sr. Letitia. Students who won the CBCI Education master mind  quiz competition held in Delh were also awarded by Sr. Letitia.

Patriotic dance was performed by the student of std. 10th. Then our honourable chief guest Sr. Letitia gave an inspiring message.

The celebration concluded by Vote of thanks by Mrs. Vidhy A. followed by the national song Vande Mataram sung by every one and then sweets were distributed.